Psychedelics have been in use around the world for thousands of years.  Mind altering plants and compounds have been found in nearly all ancient cultures and civilizations from around the world, used primarily in ceremonial context. “Indians in central and northern Mexico, peyote’s natural habitat, have ingested it for spiritual purposes for thousands of years,”  writes John Horgan in Scientific American about the use of the peyote cactus, a hallucinogenic plant, in Native American culture. These plants were used as heavenly gateways, a tool to communicate with gods, converse with passed on loved ones, and strengthen the bond and ties of a community. Psychedelics were revered for what they are: a mental medicine, a powerful way to escape your body and observe the world around you from a different angle.

Psychedelics made a roaring comeback in the 60s with the use of LSD and the cult of Harvard professor Timothy O’Leary, an opinionated proponent of recreational psychedelic use. However, this new fad was stifled rather quickly by the US government, out of fear of mental trauma and possible deadly relapses. While the ban on hallucinogenic drugs like LSD and MDMA may have quelled the fears of the common American, it ended a decade of promising research into the compelling medicinal properties of psychedelics. This research was not touched for decades, until recently. Now, psychedelics have been making a slow but steady comeback in the mental health field, for their possibility to help with depression, drug/alcohol addiction, anxiety, and a slew of other mental health disorders. Psychedelics offer two distinct upsides to traditional drugs and therapy: they are non-addictive, and they are a fast, compelling medicine that has the ability to quickly address the patient’s problem, and provide them with comprehensive relief and treatment. Due to their ability to help patients cope with depression, anxiety, and mental health disorders, and their non addictive, fast acting properties, psychedelic research should be given more funding and legal attention.

“Recent research suggests that certain psychedelic substances can help relieve anxiety, depression, PTSD, addiction and the fear surrounding a terminal diagnosis,” states Michael Pollan, journalist and author of How to Change your Mind and This is Your Mind on Plants, two books that discuss the mental health possibilities of psychoactive drugs like psilocybin (the compound found in magic mushrooms), MDMA or ecstacy, ketamine, and LSD. A key point that everyone must understand when talking about medicinal use of hallucinogenic drugs like these is the difference between their recreational use and their clinical use. Most people think about someone tripping balls out in the public, with no real purpose or intention with their trip. This is recreational usage, usage that eventually led to the demise of psychedelics in the 60s. Clinical use of psychedelics differs greatly, and mimics psychedelic usage in ancient ceremonies and cultures. Therapeutic use has two principles: set and setting. Writes Michael Pollan in This is Your Mind on Plants, “Set denotes the preparation of the individual, including his personality structure and his mood at the time. Setting is physical—the weather, the room’s atmosphere; social—feelings of persons present towards one another; and cultural—prevailing views as to what is real.” Set and setting are critical to the outcome of the trip. Studies have shown that individuals who go into a trip irritable or angry are more likely to have an unpleasant experience, and in contrast, individuals who go into the experience happy or content are more likely to have a pleasant experience. Clinical settings have the patient go into the experience with a problem on their mind, resolved to find a solution, for example, alcoholism. They are placed in a comfortable, well lit room while undergoing the experience, and are constantly accompanied by a guide, a trained medical professional who can gently guide their trip. When administered in controlled sets and settings, studies have consistently shown that psychedelics offer an effective treatment for mental health disorders. For example, a recent trial at John Hopkins University studied the effectiveness of psilocybin in patients with major depressive disorder, and concluded that, “This randomized clinical trial found that psilocybin-assisted therapy was efficacious in producing large, rapid, and sustained antidepressant effects in patients with major depressive disorder.”

Still, there persists a fear among Americans about the safety of these compounds. Stories have been told about people jumping out of windows while on LSD. Thanks to the war on drugs, any sort of education about these drugs and their many upsides has been completely suppressed. One cannot argue that there is no merit to these fears: research on psychedelics, though very promising, is still emerging. Long term effects on the heart after repeated usage are being studied, and there is still an air of caution surrounding these compounds. However, many scientists think that the benefits could severely outweigh the risks. “The biggest misconception people have about psychedelics is that these are drugs that make you crazy . . . We now have evidence that that does happen sometimes—but in many more cases, these are drugs that can make you sane,” says Michael Pollan, in a recent interview with TIME Magazine. Psychedelics work fast and efficiently, with most patients requiring only one or two sessions for a condition that would traditionally take months or even years to resolve. The same study from John Hopkins stated, “Recent evidence suggests that 1 or 2 administrations of psilocybin with psychological support produces antidepressant effects in patients with cancer and in those with treatment-resistant depression.” Furthermore, it should be noted that even the most potentially addictive psychedelic, MDMA, is less addictive than morphine, a drug administered in hospitals. The chart below illustrates that all psychedelics that have the potential to be administered in clinical settings are less addictive than common everyday compounds like alcohol or caffeine. 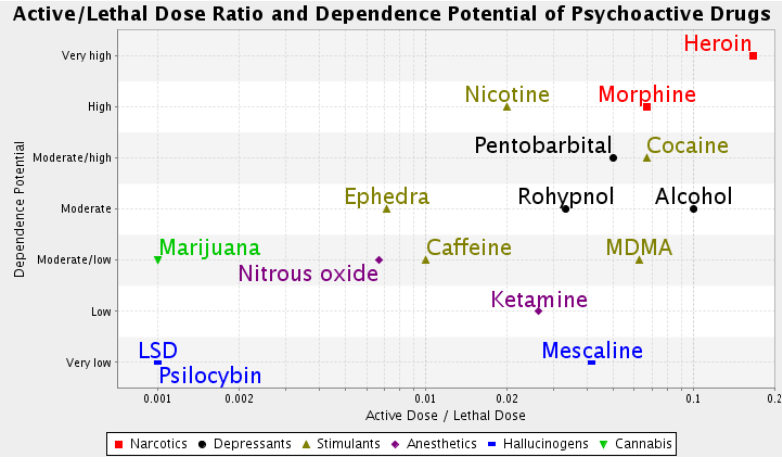 Additionally, addiction and or dependence on psychedelics is closely monitored in clinical settings. Administered correctly in the proper settings, psychedelics have the possibility to revolutionize mental health care.

Psychedelics should be given more legal funding and attention, due to their non addictive and fast acting nature, and their ability to help patients cope with depression, anxiety, and other mental health disorders. Psychedelic awareness has grown across the country, with the legalization of medical psilocybin in Oregon and the creation of a psychedelic research facility at John Hopkins. While experts remain duly cautious, and there is still a lot of research left to be done, evidence at the moment suggests that psychedelics may be the future of mental health treatment.